At the 2014 Milan SHG show this year I was called to mix the live performance of Gianni Rojatti e Giacomo Castellano from their latest release “Racer Cafè” album.

It has been a good chance for me also to meet Cesareo, historical Elio & Le Storie Tese band guitar player.

And that happened during the baptism of Rojatti’s Ibanez RG 550 LTD with a very rare pickguard: in fact under the clear plastic it has an actual real piece of Steve Vai‘s original Hollywood house living room curtain, which he gave to me at the time I was assisting engineering at his Mothership Studios in Hollywood, CA, for Favored Nations record label. This was the idea of Ibanez, in the ’80, by releasing a Jem model with a reproduction of that curtain… well… now Gianni has THE original one! 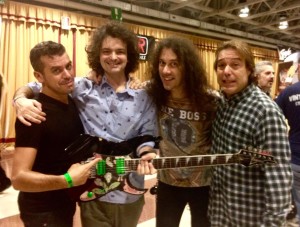