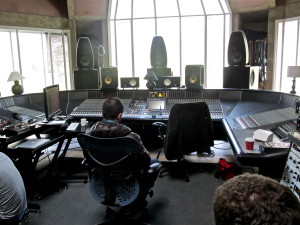 After the Dolcetti / Aristocrats italian tour I literally bailed to UK to meet Luca Wu and go to Peter Gabriel’s Real World Studios in Box (very close to Bath) to mix and master “Chinese Winter”, a slow tempo ballad song, as a “single” to be introduced in the Chinese market: therefore, “Chinese Winter” has lyrics in English, Chinese and Italian.

It’s a song that I am particularly attached to since I mixed its first EP version in 2012 and then I was asked to join the Wu Band and actually to play the guitar parts. We then recorded the real state-of-the-art version of it in Cagliari, at CagliariCalcio Studio: Alessandro Benedetti did the drums, Fabio Useli (the one-take man!) the bass parts and some ‘extreme’ vocals, Luca his vocals. I recorded few guitars: electric guitars ( a-la Andy Summers) with a complete Fender set up – amp and guitar – and 12-string guitar parts, really effective on choruses and bridge.

Not to forget the incredible string section tracking with Matteo Gallus on violin and Gianluca Pischedda on cello: we actually tracked each single part up to 5 times in order to get a final “orchestra” ensemble effect.

So… finally we are in Bath now, booking the Real World Studio main A room, to mix and master with Patrick Phillips in a full 14-hour day session.

Another cool thing is that actually we are gonna sleep here tonight since the studio has a separate building with cozy rooms, plus a kitchen with a cook for guests!